The Yen’s Impact On Job Security And Your Portfolio 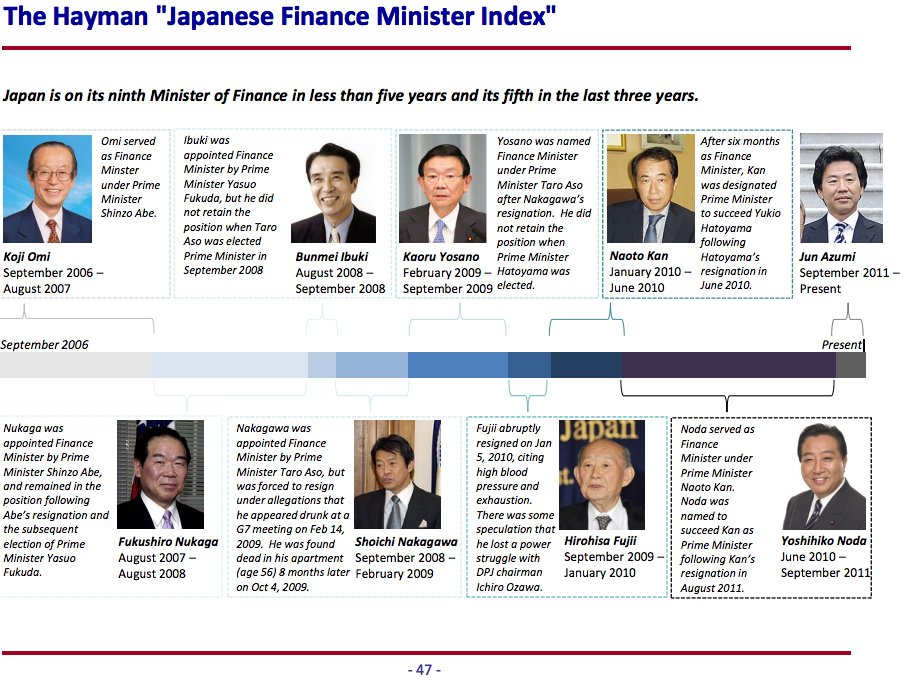 The fact that Japan is on its 12th Finance Minister in the past 10 years should give you an idea of how difficult it’s been to manage their country’s currency during an ongoing deflationary cycle that started 25 years ago. For reference, the Federal Reserve has had two chairs during past 10 years: Ben Bernanke & Janet Yellen.

What does the aforementioned have to do with your portfolio? The Japanese Finance Minister Index lets us know that managing the Yen is more than a difficult job. Some (maybe a former Finance Minister?) might say impossible. And as we highlighted back in October, the Japanese Yen should be watched closely as it gives clues regarding the direction of U.S stocks. If the Yen were to start appreciating, which is exactly the opposite of what Japan wants, we should pay attention. And if the Yen has a strong negative correlation to U.S. stocks, we should be on the edge of our seats and very concerned about a deepening correction in U.S. equities. As we pointed out in our October article:

For many years now, the correlation between the yen and S&P 500 has been -0.9 to -1.0. Meaning, whichever direction one goes, the other goes equally the other direction. So as investors, we should definitely care which direction the yen is heading. If it is dropping in value, that is a positive for the S&P 500 while an increase in yen value means trouble for the S&P 500.

We can see that two days ago, the Yen broke out over an area of supply that’s been in place since late 2014. In the past, buyers had stepped in near the 82-83 price level. But a little over 48 hours ago, this changed. Demand for Yen has driven its price to new 52-week highs. Correspondingly, U.S. stocks (represented by the S&P 500 in the top pane) have held up so far, holding near previous areas of demand (shaded gray area). If the Yen continues upward, we expect U.S. stocks to resume their descent. Nothing is guaranteed and as investors and market participants, we must not marry our opinions and keep an open mind. We only care about price. It’s still possible for buyers to step in at this level and save U.S. stocks from further downward pressure. If that takes place, we expect the Yen to rapidly reverse course.

We’ll make sure to provide updates to this scenario as it unfolds, with price targets for both the Yen and U.S. equities.

Disclaimer: Nothing in this article should be construed as investment advice or a solicitation to buy or sell a security. You invest based on your own decisions.

Get your FREE copy of "The Ultimate ETF Cheat Sheet: Your All-in-One Quick Reference Guide to U.S. and Global ETFs"